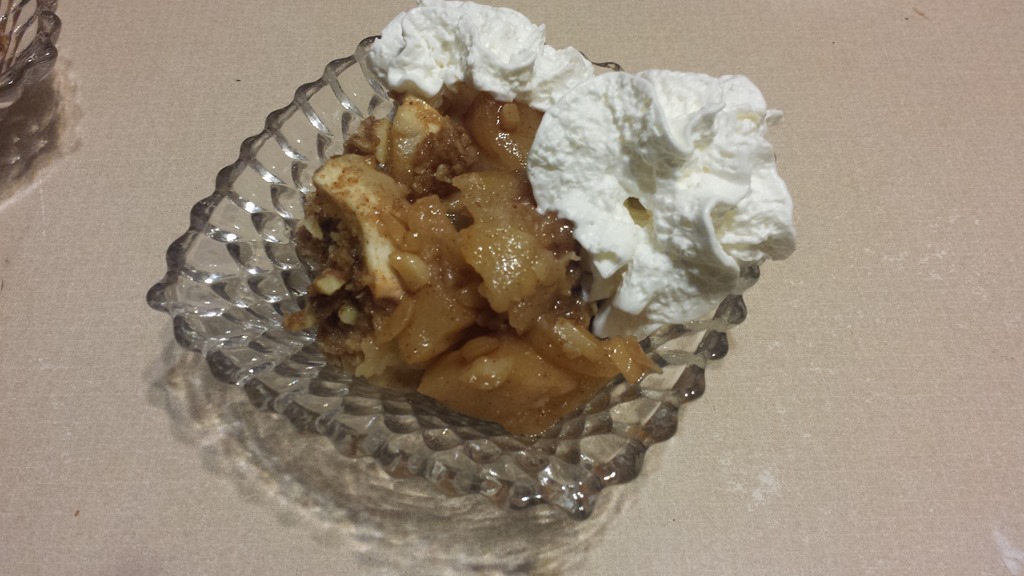 I’ve got the first of what’s sure to be many 80’s dessert recipe tests for you this week – Spicy Apples N’ Oats from the Panasonic Microwave Cookbook.

I don’t know why they called this recipe Spicy Apples N’ Oats, which sounds a little scary.  This is basically an apple crisp with some nuts in it.

Here’s the ingredients.  Something to note – recipe calls for 4 large baking apples.  I started peeling 5, but that wasn’t anywhere near enough – I ended up adjusting the quantity to 7 apples.  Unfortunately most of my ingredients are in tins because I buy in bulk, but we’ve got almonds, brown sugar and oats in the tins here.  I decided to go with almonds, as I have many picky people in my family who don’t like other nuts.

Sugar, spices and nuts combined, ready to go on the first apple layer.

Ready for the microwave!  Something else to note – my microwave was definitely not as powerful as an 80’s one.  Recipe called for 4-5 mins microwave time, I ended up microwaving for about 8.

And here’s the finished dessert!  Which doesn’t look that much different than the raw dessert, I know.  But I swear it is cooked here.

I decided some whipped cream might go well with this, which it did.  Ice cream would be good, too.

And the taste test …

Ironically, I thought walnuts would have actually been the better nut choice for this recipe, but I went with the almonds to try to make everybody happy *sigh*

Verdict: It’s good.  Tastes like apple crisp with walnuts in it.  Even if you don’t use walnuts.