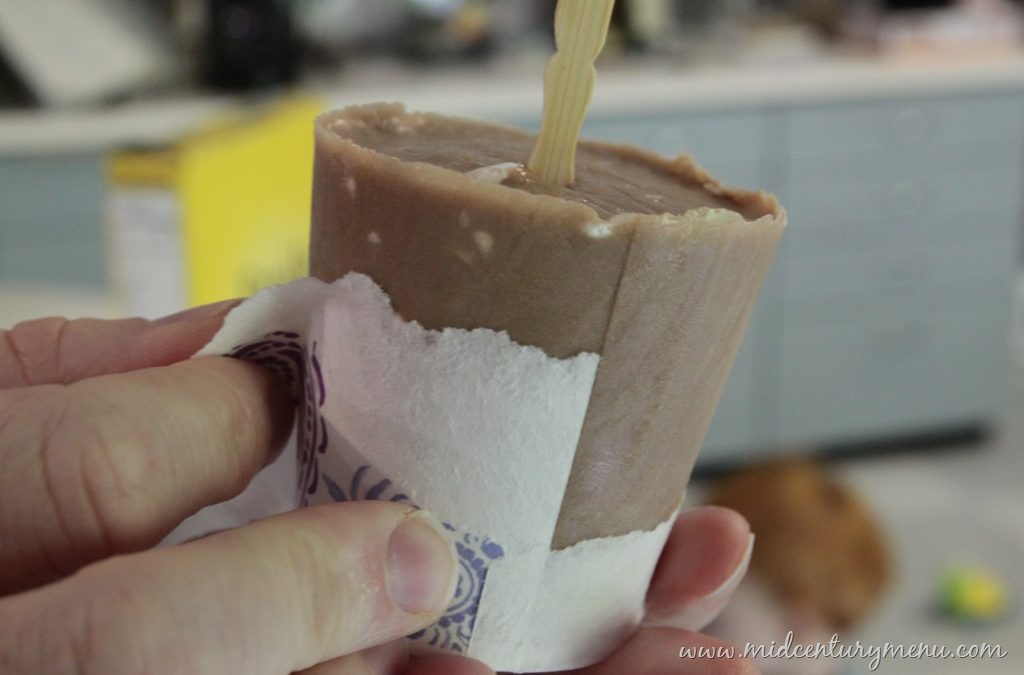 This week we are having fun with yogurt and marshmallow crème!

These are Chocolate Marshmallow Pops!

This recipe came from a cute little Borden booklet called Swiss Recipes Using Borden Lite-Line Yogurt from 1983. I have to admit that I don’t know if a chocolate marshmallow pop is really a Swiss Recipe, but it’s fun so we will just roll with it.

As you can see, I was a little too lazy to use my blender, and I just whisked everything together. Which is why I ended up with little marshmallow bits floating around in the chocolate yogurt.

I actually really enjoyed doing this. I vividly remember making little paper cup Kool Aid popsicles in the summer during my childhood. Sometimes we would even put a piece of plastic wrap over an ice cube tray filled with Kool Aid, poke toothpicks into the plastic wrap and make mini-pops!

“Not great. What’s in this again?”

“Ah, that’s it. This tastes like a sour version of chocolate frozen yogurt.”

From The Tasting Notes –

Sour, gritty and bland. We were never big fans of chocolate frozen yogurt, so that may be why we didn’t love this. However, if you want to make these I would suggest either doubling the marshmallow crème OR adding in chocolate chunks and mini marshmallows into the pop itself. Or you could just do it the cool kid way and use Kool Aid!