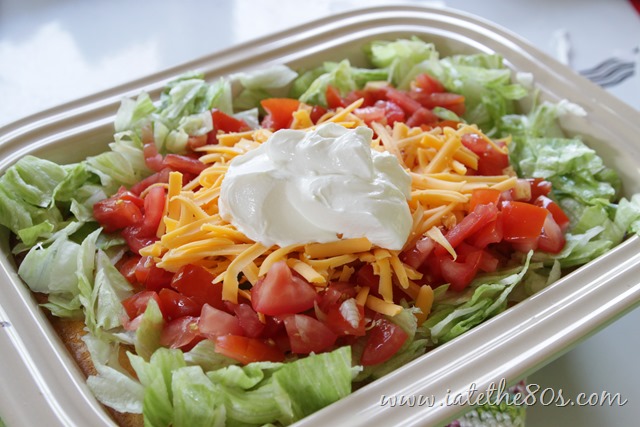 Bisquick’s “Impossible” pies were a big, big trend in the 70’s and the 80’s. The basic premise of this is that you can throw your add-ins into the pan, then mix up a batter of Bisquick, milk and eggs, pour that over the add-ins and pop it into the oven. While it bakes, the batter will settle into a crust and create separate filling layer, miraculously making a pie. Mostly the “Impossible” variations of the 1970’s were sweet (coconut, raspberry) but in the late 70’s and 80’s they started going savory, like Cheeseburger, Pizza and…

I blended my batter in my blender, because I was running short on time before dinner. It was actually really fun!

It came out looking a bit more like a bread than a pie, but I wasn’t too concerned. I threw on the cheese and tomatoes and popped it back in the oven.

If you look closely, under all the toppings you can see the “crust”.

But Tom didn’t care about crusts. He just wanted the taco filling.

“Yes. It tastes like I am eating at the family reunion. It must have been served there a lot. I didn’t even remember that until I took a bite.”

From The Tasting Notes –

Overall, this was pretty bland, but still good. A later version of this recipe (from 1987) calls for an additional package of taco seasoning (two packages total)  and some ripe olives. I don’t know about the olives, but this needs the extra package of seasoning. Tom also thought that Fritos over the top would be good addition for some crunch, because the whole thing was very soft. This did end up making a crust and filling, but the filling still had a bit of a “bread-y” taste to it. However, just plain tacos would have been easier to make. Making this added an additional half hour of cooking time onto dinner, and really didn’t add any flavor. BUT if you want to serve tacos where the traditional taco would be impractical (like a family reunion) then this would be ideal!