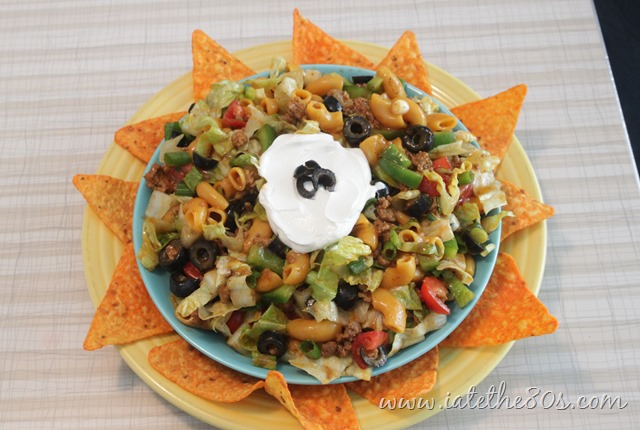 So, this week we are taking a box of Hamburger Helper and making it into a salad!

This is Hamburger Helper Taco Salad!

This recipe is from a 1988 issue of Woman’s Day, and I have to admit that I have been a little obsessed with this one. I mean, I have been eating Hamburger Helper for years, but who would ever think of making it into a salad? I hadn’t. So I was pretty excited to make this one. But Tom was less than enthusiastic.

“Well, yeah. I guess. It’s kind of an ingredient in what I am making.”

“Oh god. Is this another weird pizza?”

“Nope. This time it is a weird salad!”

“It’s okay. Not as insane as I thought it would be.”

“Yeah, and I don’t even like Hamburger Helper. I could do without the warm, limp lettuce though.”

From The Tasting Notes:

It is pretty heavy on the raw onion and green pepper, but is actually a pretty good use of Hamburger Helper. It tastes a lot like a regular taco salad, except wet. The lettuce mixed in with everything was the weirdest part. It would have actually been good if the lettuce would have been kept separate and just the veggies mixed in with the Hamburger Helper and piled on top of the lettuce. However, the flavor was really improved with the addition of sour cream. Definitely will NOT taste good cold. Overall, not as bad or as crazy as we thought it would be.