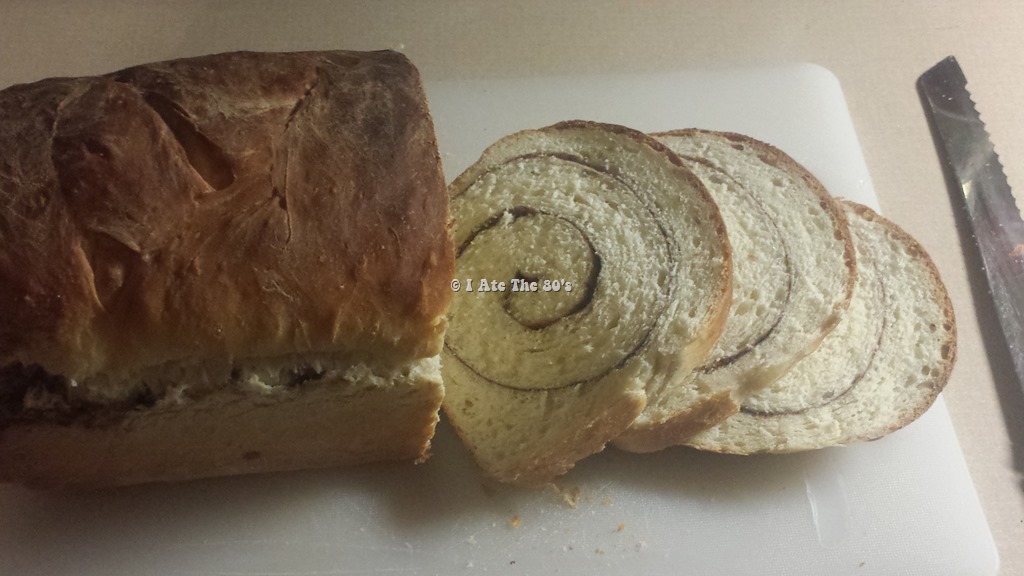 I think many of us who bake bread at home nowadays rely pretty heavily upon breadmakers – I know I do!  However, when I saw this Cinnamon Swirl Bread recipe, I decided to take a leap and foray into the world of bread making without a breadmaker.  I am a sucker for Cinnamon Bread, and it’s rare that I can find a bakery that makes it.

The recipe I am using is from the Better Homes and Gardens Favourite Bread Recipes cookbook.  The Cinnamon Swirl Bread is a variation on the Egg Bread recipe.

Here’s the finished loaf in the cookbook – looks delicious, no?

Here’s my finished dough after mixing.  It was easier to mix up than the recipe seemed to imply.

And here’s my risen dough.  The one thing that I usually like about the breadmaker is that it keeps the dough at the right temperature to rise (it’s still winter here and my house is often cold).  However, I turned on the oven to 200°F for a few minutes, just to warm it up a little, and then turned it back off, and let the dough rise in there.  This seemed to work really well.

And here’s my dough, covered with cinnamon-y goodness.

All ready for the oven!

Mmmmm … If there was a way to send how the bread smelt at this point, I totally would.  It smelt absolutely heavenly!

And so pretty when you slice into it!

Soooooooo good!  This bread beat out any Cinnamon Bread I’ve had before, hands down!  I will definitely be making this bread again and again!