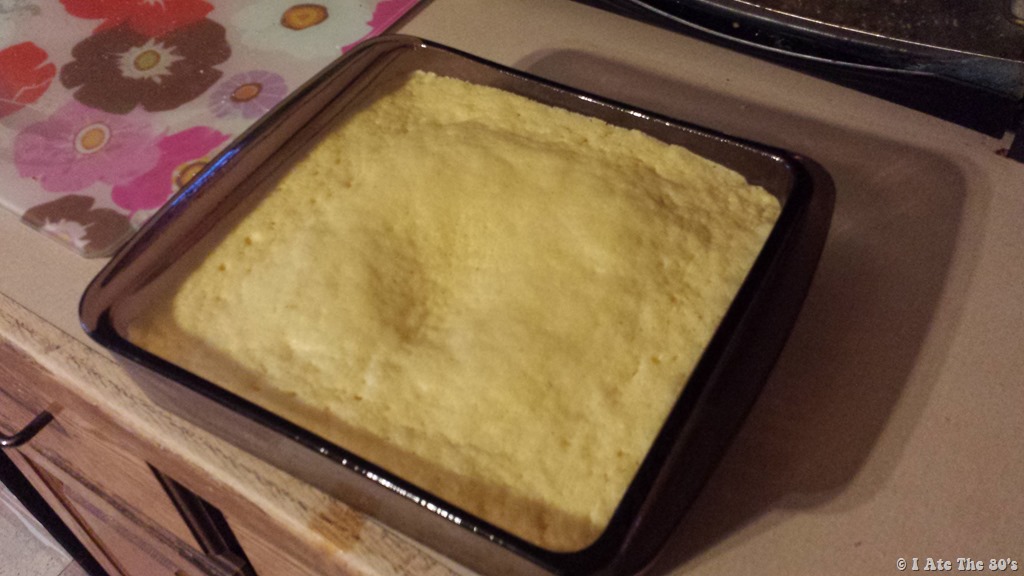 Although I am usually the writer who brings you the sweet stuff here at I Ate The 80’s, I gotta admit I am a bit sugared out.  I am still working on leftover Halloween candy, so the prospect of cooking something sweet was not appealing.  However, I felt that cornbread would be the perfect compliment to last night’s supper, so I thought I could find a microwave cornbread recipe in my trusty Panasonic Microwave Cookbook.

However, no cornbread recipe was to be found there, just directions on cooking cornbread from a mix.  So, Better Homes and Gardens All Time Favourite Bread Recipes cookbook to the rescue, where I found a cornbread recipe that looked to fit the bill.

Here’s the recipe I used:

And here’s the instructions that the Panasonic Cook Book gave me:

Now, you’ll note it states to shield the corners of your square pan with foil.  I did not do this, as I was speculating that today’s microwaves are not powerful enough to require this which worked for this recipe.  I also increased the cooking time on low from 8 mins to 10, to compensate for my modern microwave’s lack of power.

Batter all ready to go.

Now, I know that microwaves don’t brown foods when you cook in them, but I was still a bit surprised at how anaemic my finished cornbread looked.  My oldest daughter was quite certain that my cornbread was not cooked, when in fact, it was.

I did have to agree with him on the dry part – which I found a little disappointing, as I thought cooking it in the microwave might have made it a little more moist.  Still a decent recipe, though.